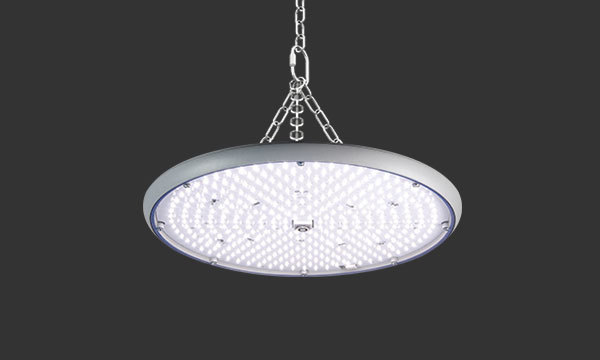 The Comboseal is a high efficiency, IP66, circular LED luminaire for high and low bay applications, designed to be used as a direct replacement for traditional single point suspended discharge luminaires up to 250W.

The Comboseal is available in 98W and 137W, with SmartScan versions with integral PIR suitable for use up to 8m.

The Thorlux designed PCBs are capable of producing over 22,000 lumens of white light, with colour rendition greater than 80 CRI. 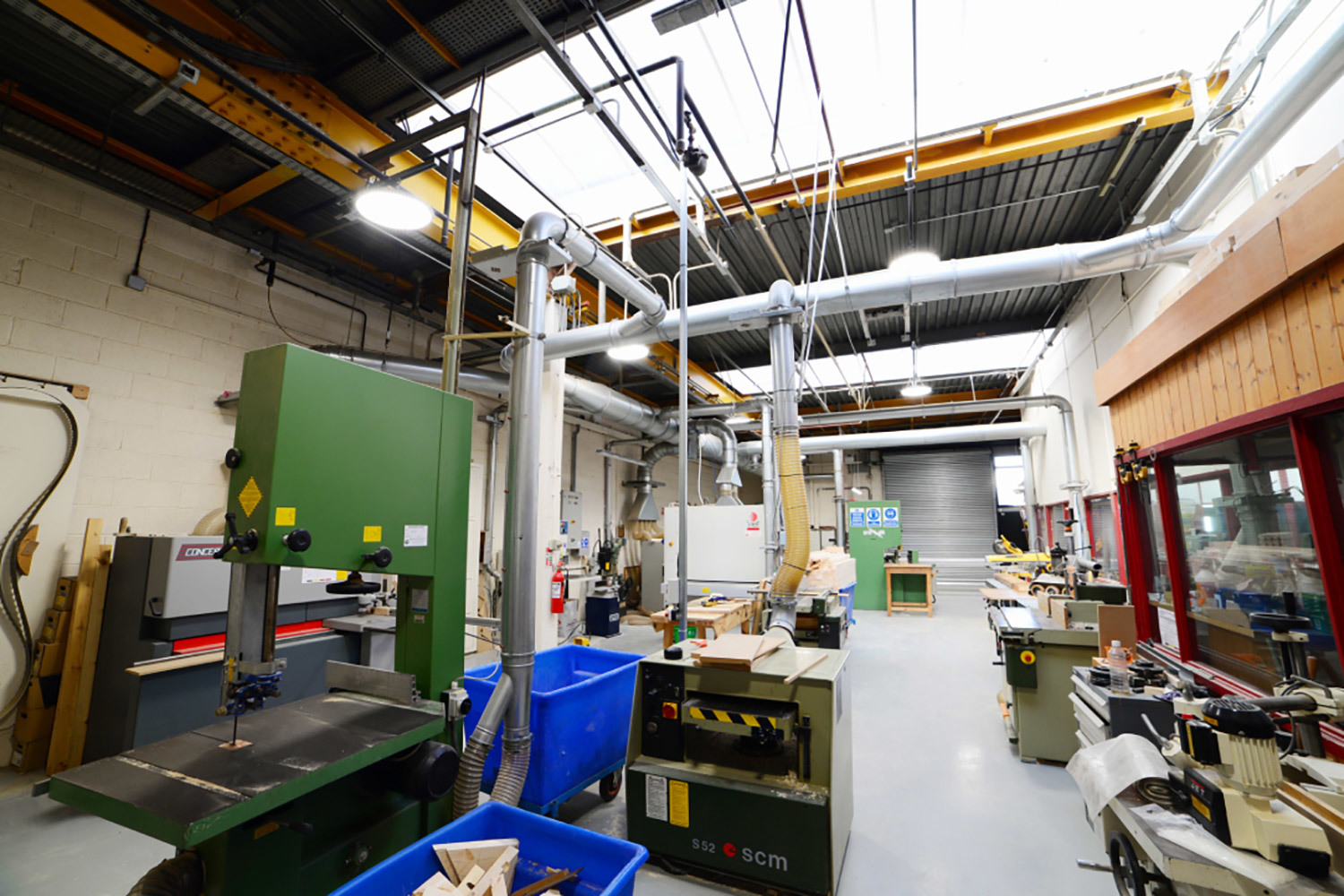 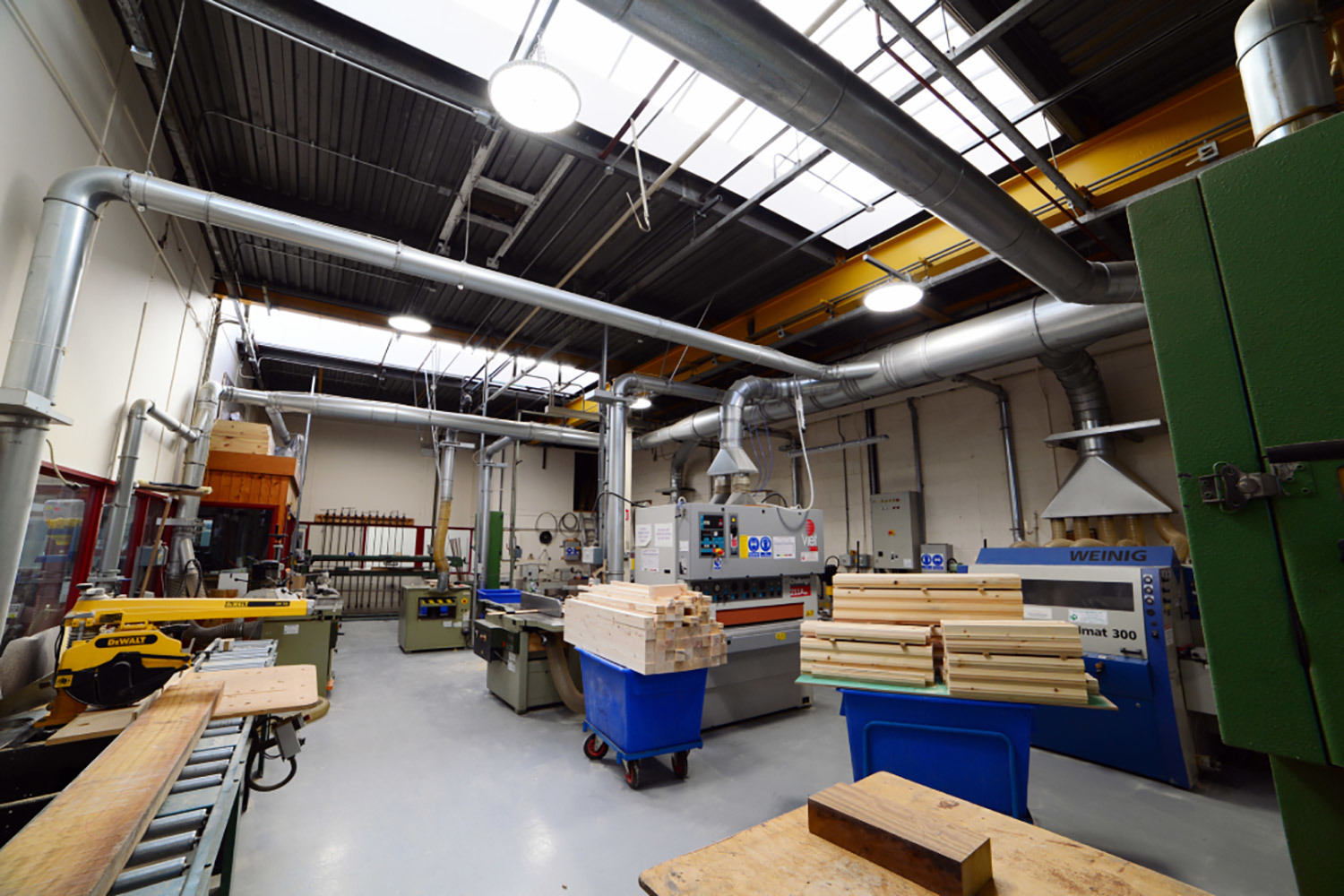 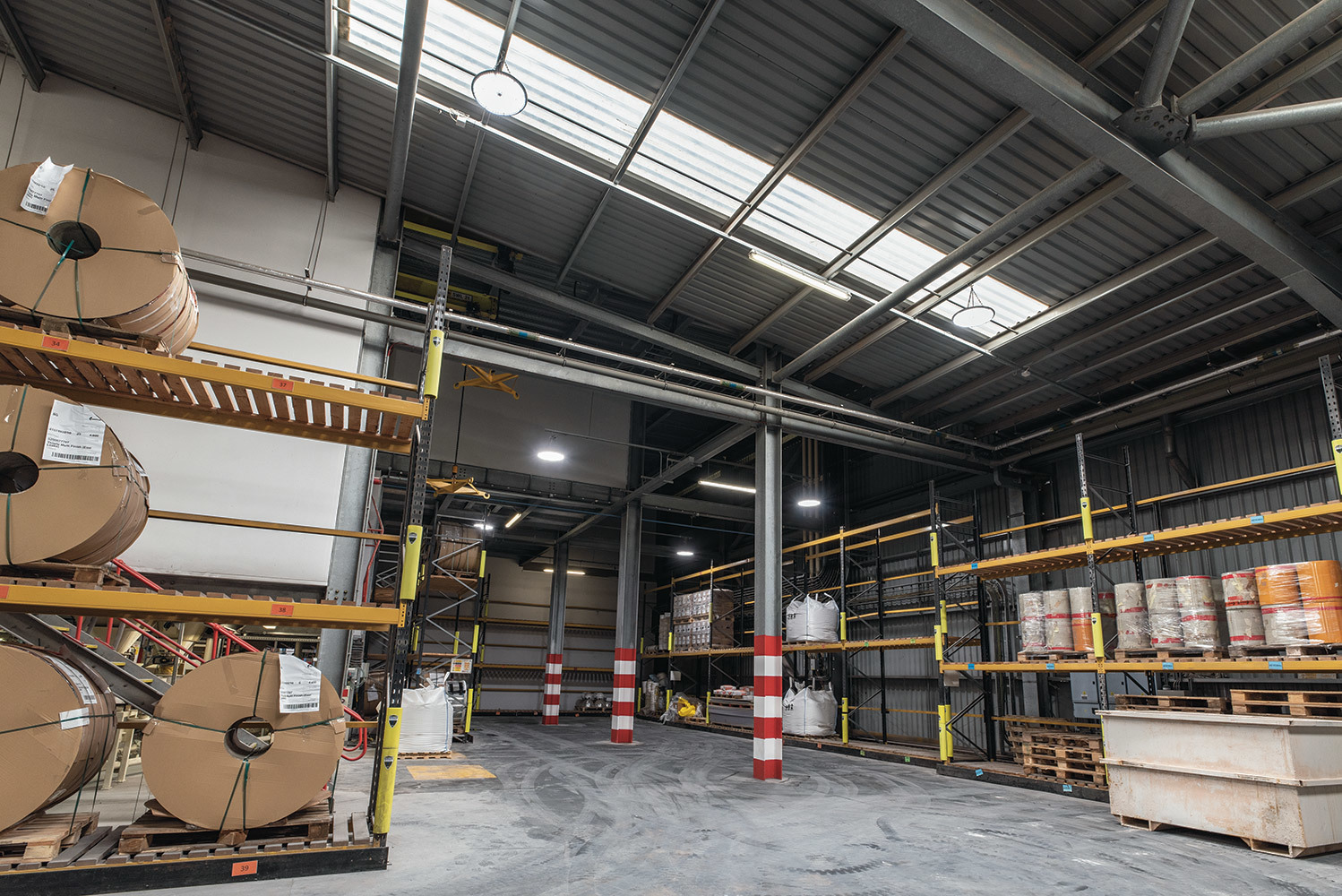 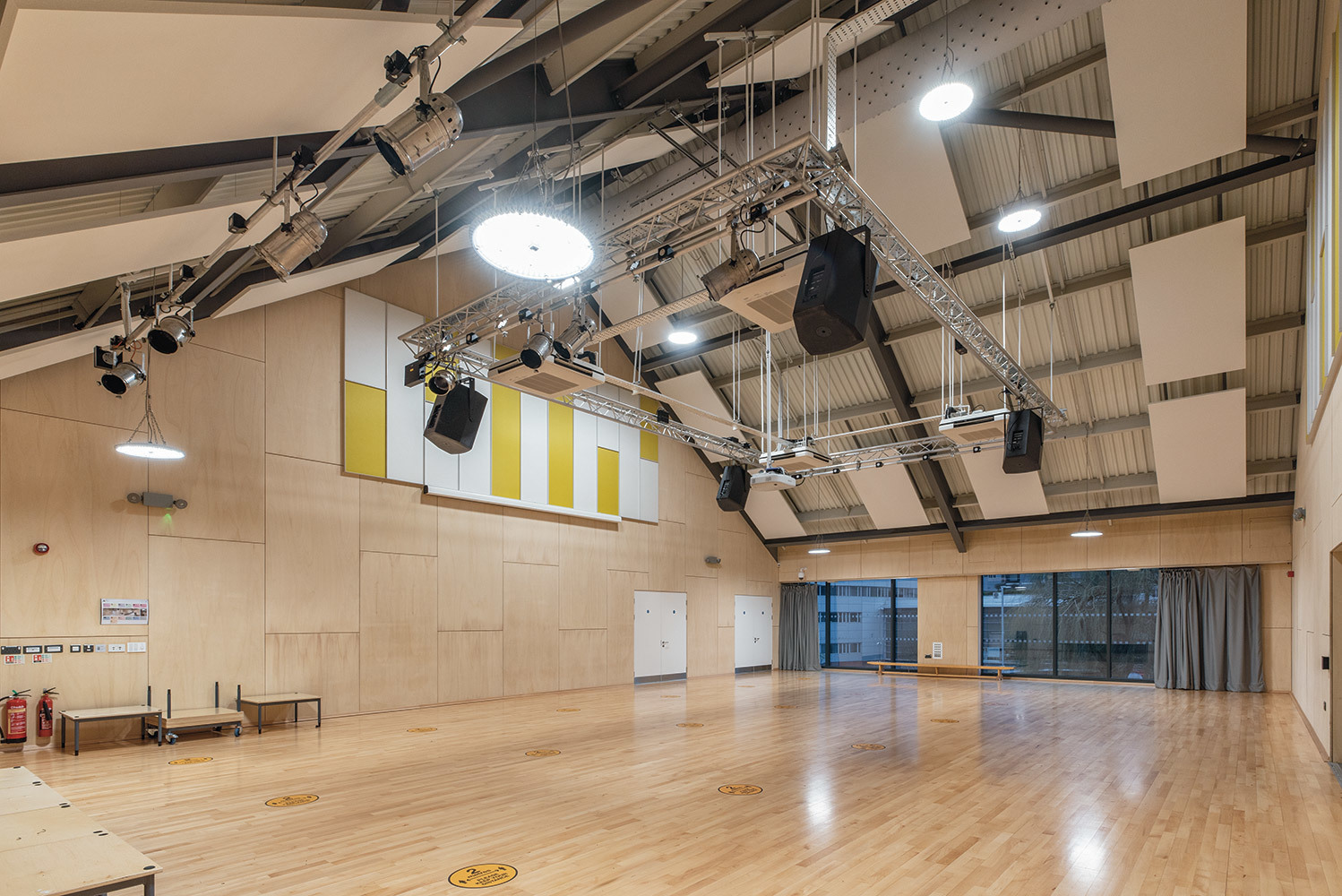 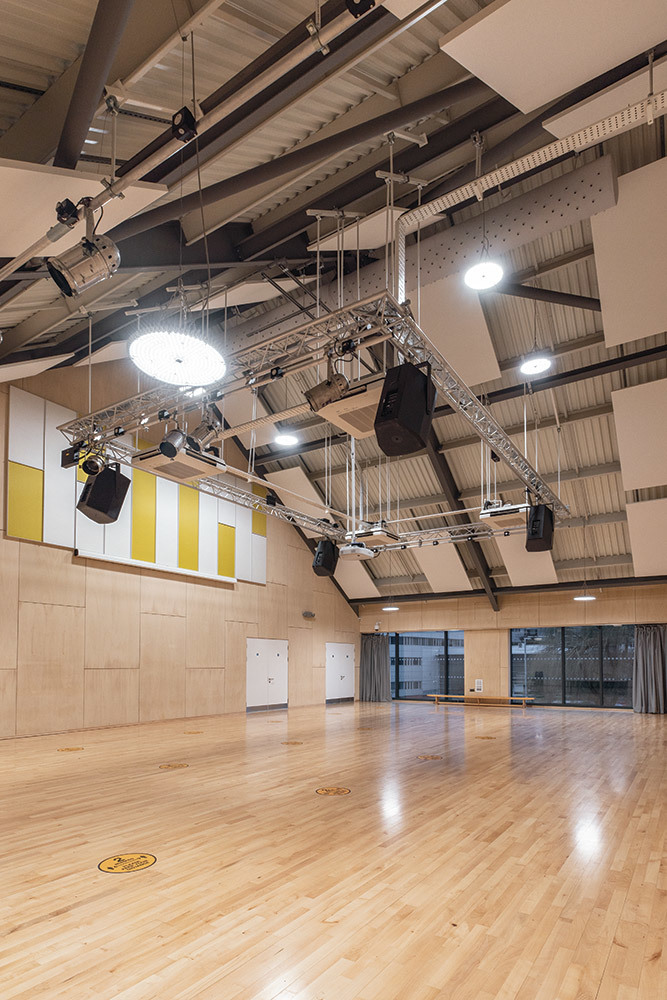 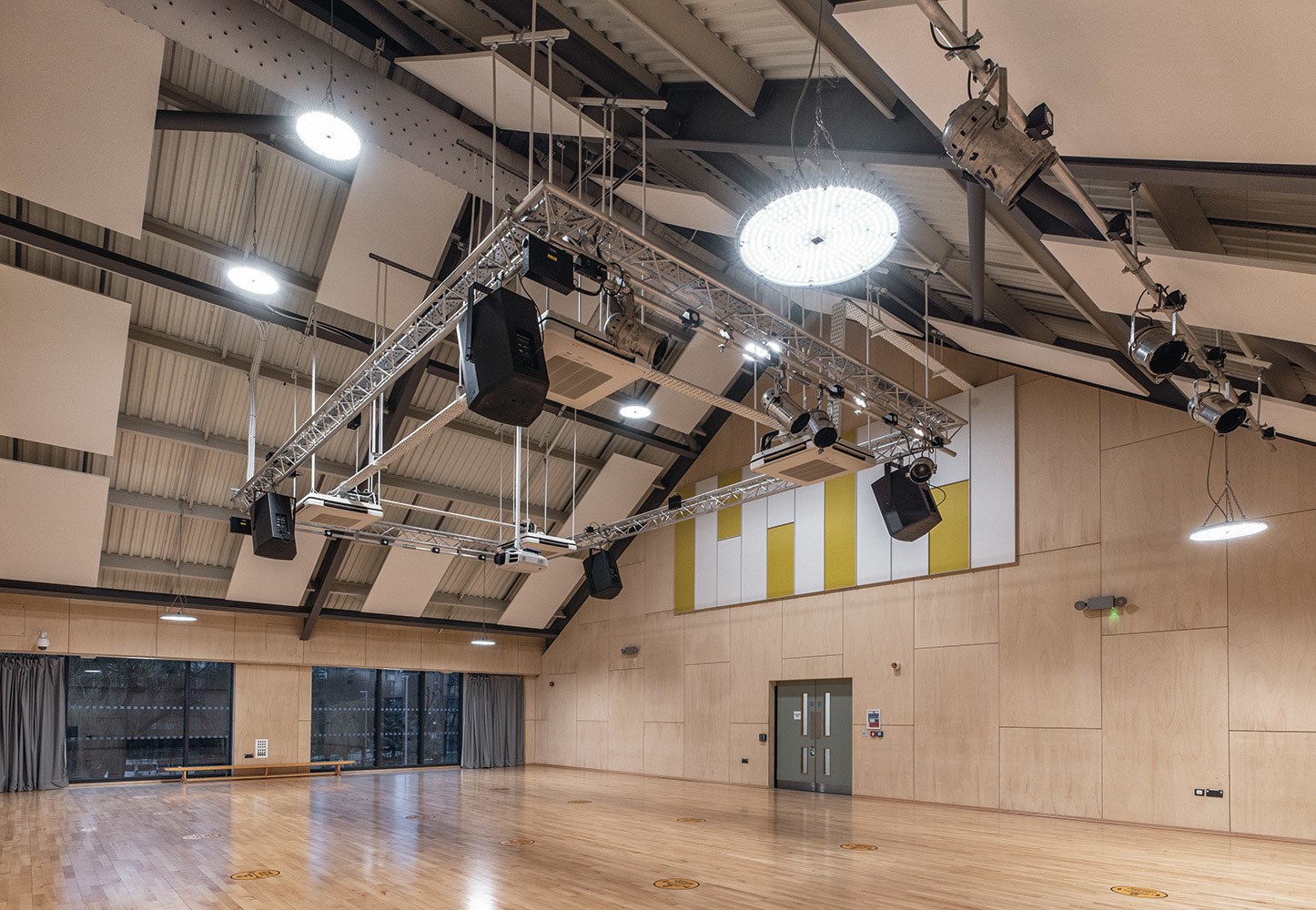 Designed to hang from a single suspension point, the balanced circular body is a suitable replacement for traditional discharge luminaires. Integral Smart controls allow the installation of energy saving luminaires without the need for additional cabling.

The Thorlux designed PCBs are capable of producing over 20,000 lumens of white light, with colour rendition greater than 80 CRI.

The Comboseal Plus is available in 171 W, 251 W and 326 W with broad or narrow distribution, Smart versions suitable for mounting up to 18 m.

The sleek aluminium construction paired with toughened glass cover make the Comboseal Plus ideal for use in dust and moisture laden environments and areas where chemicals are in use. For further details contact the Thorlux Technical department.

High efficiency control gear and medium power LEDs provide a total system life of 100,000 hours, even in versions suitable for operating in ambient temperatures up to 55°C.

The Thorlux designed PCBs are capable of producing over 44,000 lumens of white light, with colour rendition greater than CRI 80. Narrow distribution versions have a dedicated lens for each of the 576 LEDs ensuring the most efficient distribution of light. At high mounting heights excellent optical performance can make significant improvements to illumination levels and uniformity providing long term energy savings not apparent from headline luminaire lumen output figures alone. 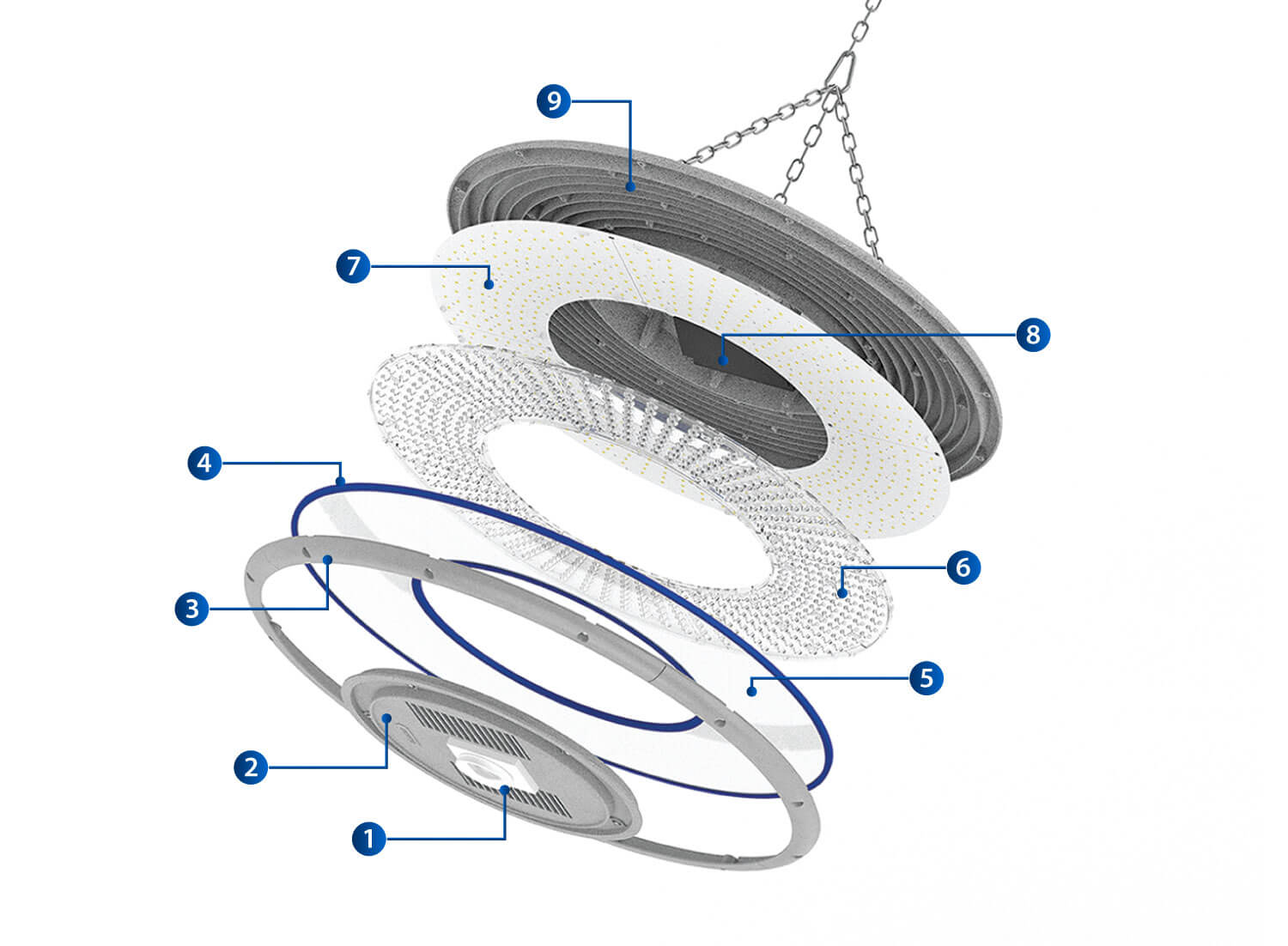 Long life thermally stable silicone gaskets maintain the IP rating for the life of the luminaire.

4mm thick toughened/safety glass cover has excellent chemical resistance and will not deteriorate in atmospheres that are harmful to plastics. For further details contact the Thorlux Technical department.

Custom made acrylic lenses. A dedicated lens for each LED ensures the most efficient distribution of light.

Fully replaceable control gear. All electronic components have the same rated life as the LEDs. 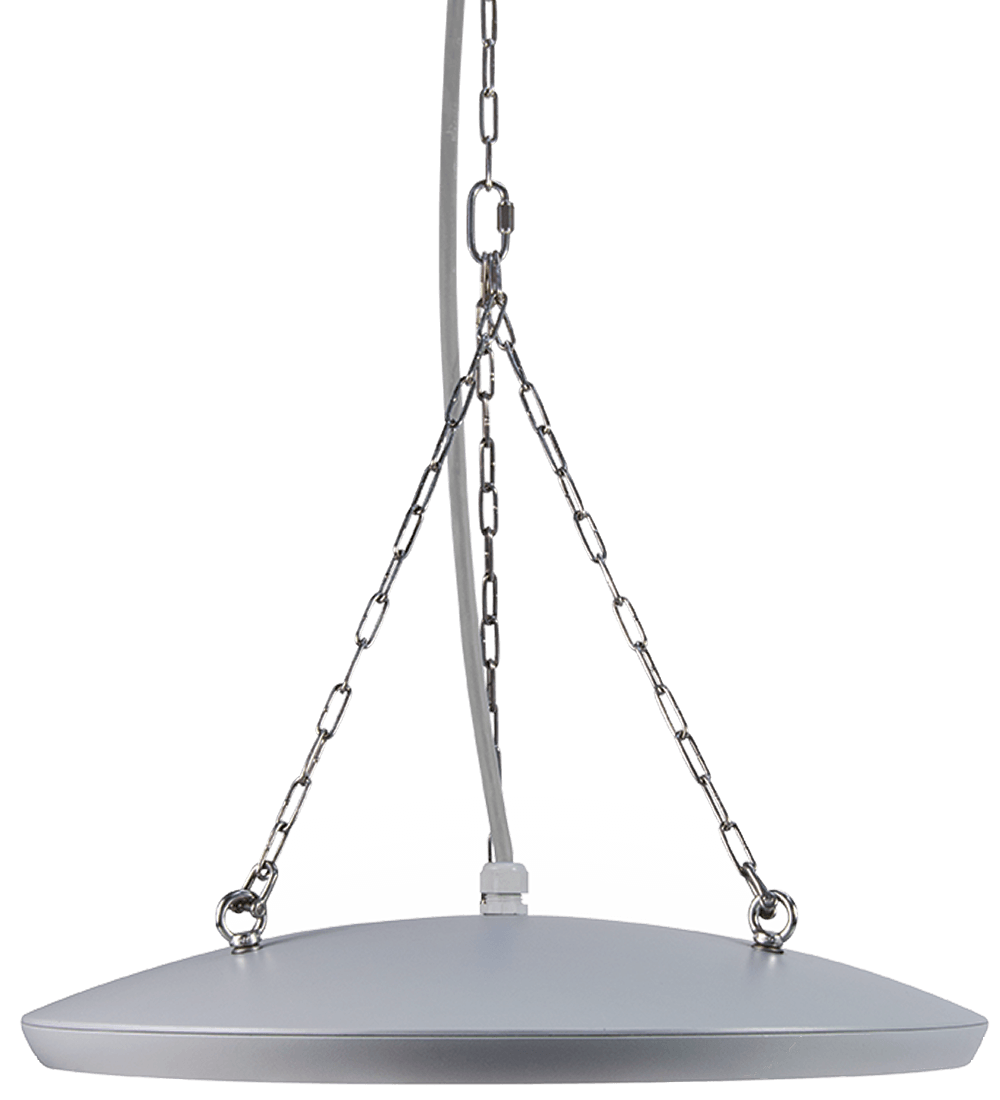 DESIGNED TO PERFORM IN HARSH ENVIRONMENTS

Designed with smooth surfaces, the curved profile eliminates accumulation of dirt and ponding of fluids.

A LENS FOR EVERY LED

Full polyester powder coated aluminium body with smooth, sloped back and glass cover make Comboseal Plus ideal for use in areas where corrosive chemicals are used. For further details contact the Thorlux Technical department.

THE IDEAL LUMINAIRE WHEN EFFICIENCY IS KEY 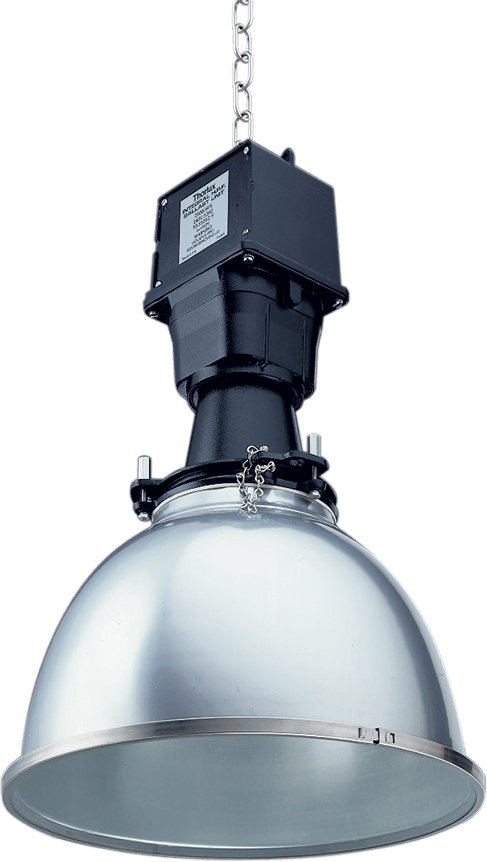 LEDs are a very efficient light source and are resilient to many conditions that can be detrimental to the lifetime of traditional lamps.

For example, LEDs are largely unaffected by frequent switching, shock or vibration. However, LEDs or their solder joints can infrequently fail. In such circumstances it would be inconvenient if the failure caused significant loss of light, or if the luminaire extinguished completely.

In many luminaires LEDs are linked in series whereby a current flows through each LED in turn. Should an LED or solder joint fail, a whole row of LEDs, or in fact all LEDs may extinguish. Thorlux has designed specific protective measures to prevent such a condition.

LUX GUARD by Thorlux, is a patented current sharing PCB and circuit design philosophy. If an LED fails then its current is shared via neighbouring circuits, with each LED’s brightness increasing slightly to compensate. LUX GUARD ensures that a luminaire continues to provide its designed lumen performance, even in the case of nuisance LED failures, and reduces the maintenance costs of a project. 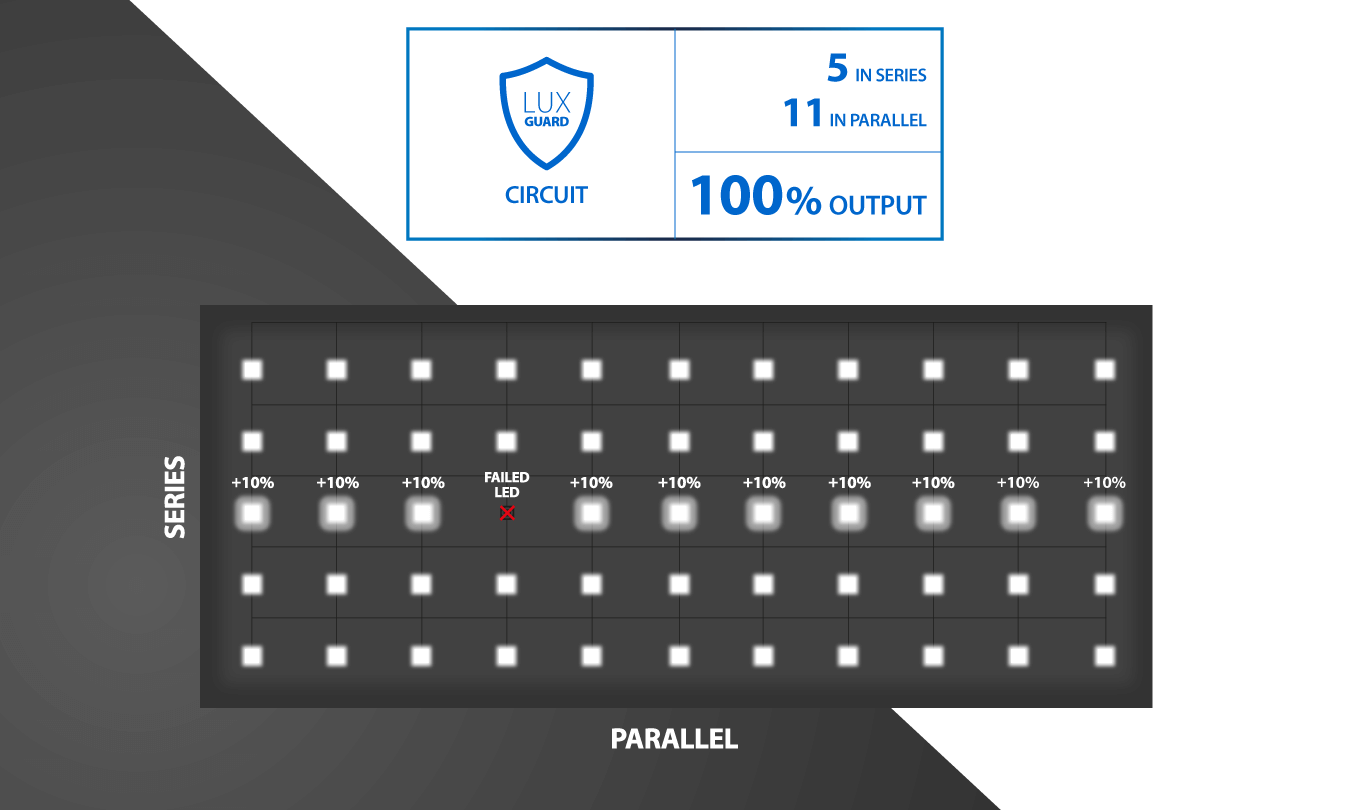 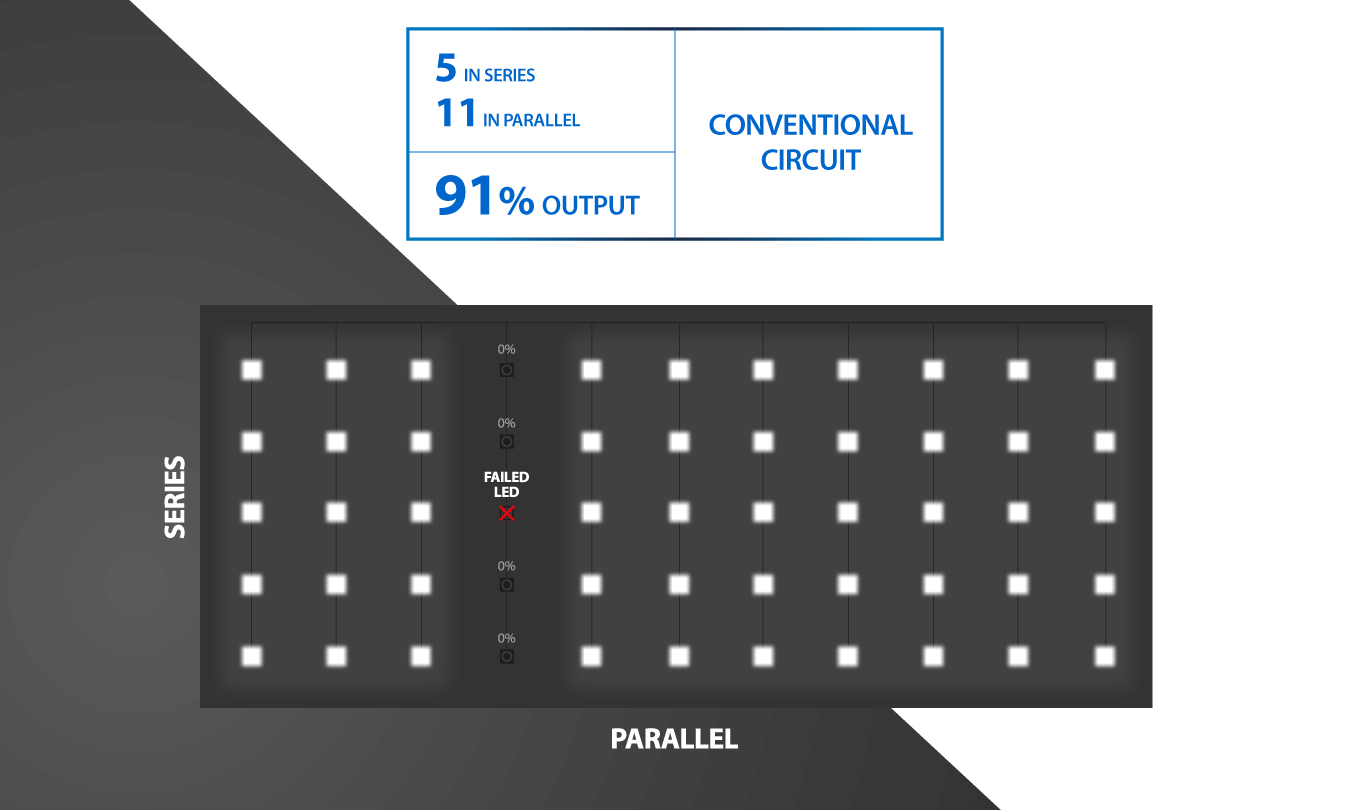